Angus was delighted to be invited to join Jess Montgomery and Samantha Clark as a guest on the Eventing Radio Show to talk about winning the British Eventing Course Design Scholarship. Click here and listen from 7:10 minutes.

We are delighted that Angus has been selected as an inaugural winner of the British Eventing Course Design Scholarship which is supported by the Bill Thomson Bursary. The selection process was very interested and involved a series of interviews and practical field assessments. Angus is looking forward to enjoying the opportunity to develop his passion for course design and to experiencing tutelage from some of the best course designers in the world. The image below features Angus alongside the final selection panel of Captain Mark Phillips and Jane Holderness-Roddam.

See British Eventing’s official news story here and an article from the Horse and Hound website here. The story was also covered by Horse Deals. 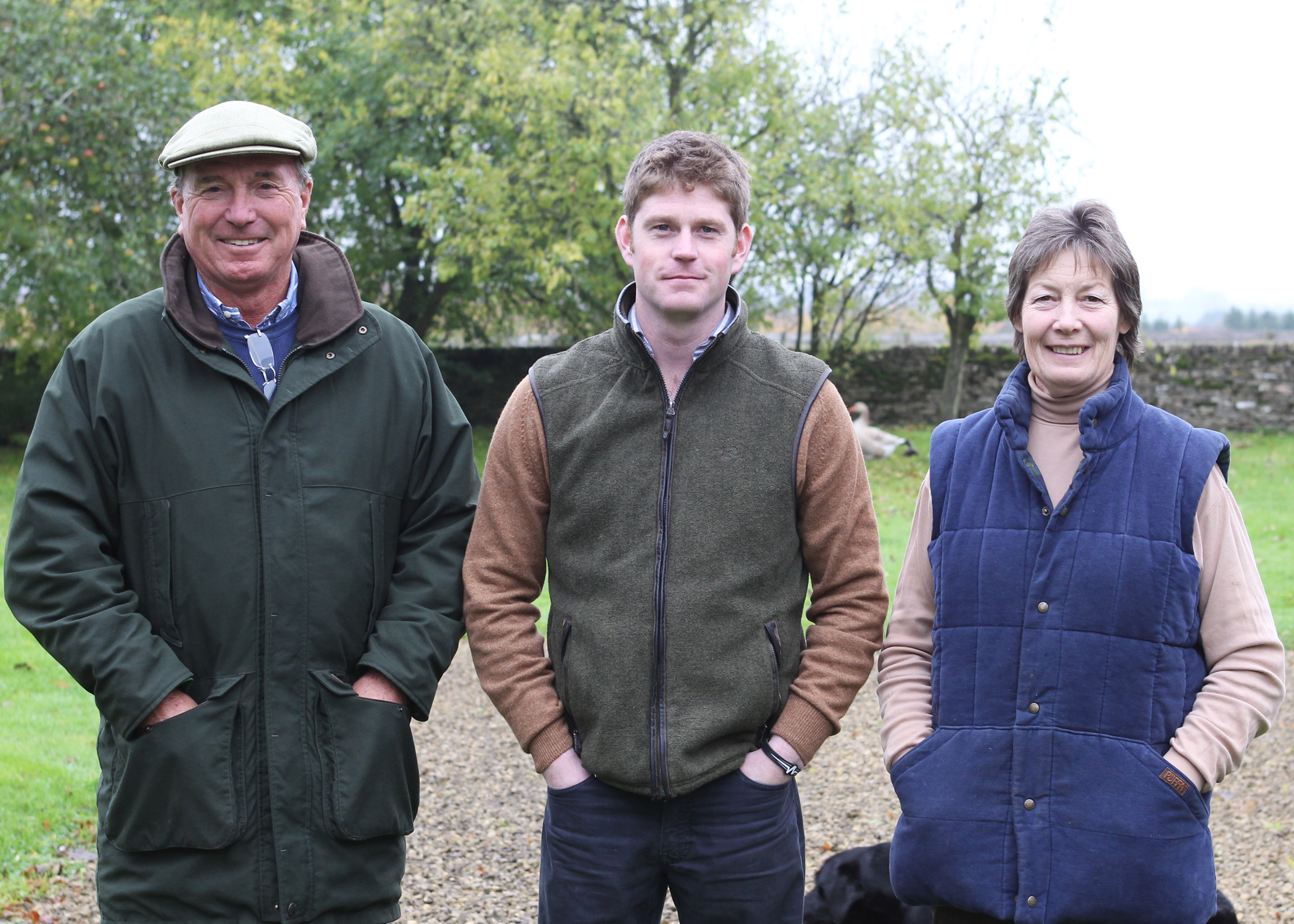 Oasby was the final event of the 2013 season for Angus Smales Eventing. Angus is looking forward to spending some time hunting and training over the winter.

Master Crisp (Gary) had his final run of the season at Oasby. He produced a lovely dressage test to score 30.0, rolled one unlucky pole in the show jumping and jumped very confidently across the country to finish 16th after the addition of some time penalties.

Mrs Diana Birch’s A Bit Much (Charlie) 5th in the CCI2* at Weston, finishing with a clean sheet following a stylish cross country round. Amy Burbage’s The Pilgrims Promise (Treacle) finished a little further down the placings in 12th.

It was a quick turnaround at home after Blenheim, the team repacking the lorry ready for the journey to Ireland. Mrs Susan Allen’s Taal (Harry) and Mrs Helen Jarman’s MJI Mount Echo (Todd) were on board and ready to contest the CCI2*.

Todd was very handily placed in 3rd after the dressage, but had an unlucky stop on the cross country course so Angus took him steadily round the remainder of the course. Todd jumped a fantastic show jumping clear on the Sunday and will have come away from the experience having learnt a lot so we’re looking forward to having him out again next season.

Harry finished the weekend in 8th place following a clear on Saturday and two unlucky poles on the Sunday.

Angus spent a pretty wet and windy few days in Oxfordshire and was a member of the commentary team as well as hosting a master class about schooling tips for hunting with fellow eventer Michael Jackson. It was great fun and a huge hit with the crowds! The week also provided a chance to catch up with some of our Sponsors including bedding suppliers Hemp Technology (Angus pictured below with John and Fergus). 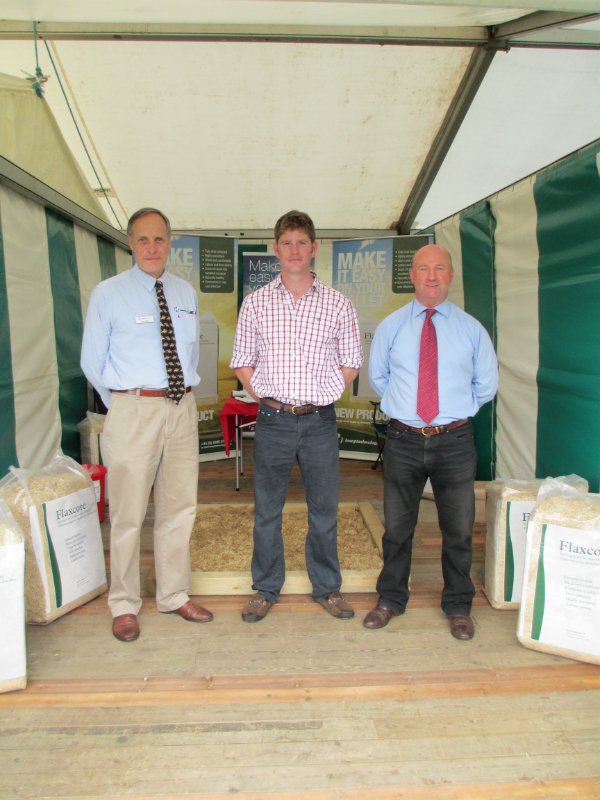 Angus had five Intermediate horses at Richmond, spread across the Intermediate and Open Intermediate sections. Mrs Diana Birch’s A Bit Much (Charlie) finished 3rd adding nothing to his 35.5 dressage.

The two Open Intermediate entrants, Bargrange Brioni and The Pilgrims Promise, ran steadily but clear across the country to finish 19th and 13th respectively, as did MJI Mount Echo and Taal in the Intermediate.

Somerford was a successful event; the team left with four out of four clear cross country rounds and only one show jump down between the four Intermediate horses.

It was a shame to have to return the British Intermediate Championship trophy to Gatcombe, but Angus had a ride in each of the Novice, Intermediate and Advanced sections at the 2013 Festival.

Mrs Diana Birch’s A Bit Much had a clean sheet in the Novice, finishing in 5th place on the Friday.

The Pilgrims Promise added just a few time penalties to an Intermediate dressage of 32.1. The Intermediate Championship was hotly contested and very competitive so it was fantastic to finish 8th out of 90 starters!

Ballyvooney jumped a fantastic double clear in the Advanced and will now head to Burghley CCI 4* at the beginning of September. 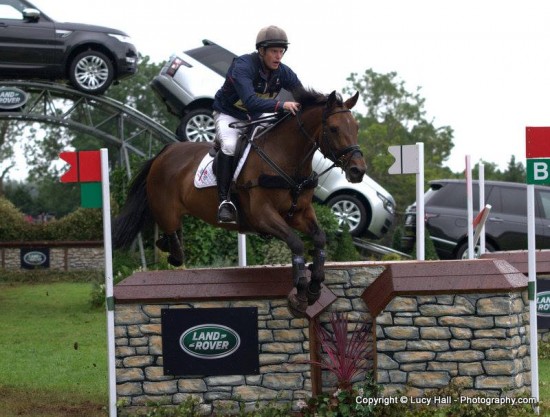 It was brilliant to have Mrs Charlotte Straker’s Clover Hero (Cody) at Hickstead and the Grand Prix is such a fun competition. Cody jumped brilliantly and learnt a lot from such an atmospheric arena. Angus rolled just one pole to complete in 217.74 seconds.

Taal (Harry) and MJI Mount Echo (Todd) were both in the Intermediate at Cholmondeley Castle in Cheshire. Harry finished 5th and Todd 11th following cross country clears round a testing track designed by Alec Lochore. Have a browse of the gallery to see some great pictures from Jules Walker.

Angus has a Novice win at Carlton with Lismakeera Sambuca who added just four penalties to his dressage score of 26.0.

Mrs Tina Sharp’s Ballyvooney (Bertie), Angus’ fathers’ Cornsay Grouse (Grouse) and Ian and Heidi Woodhead’s DHI Loner (Jim) all jumped superbly in the Advanced sections at Aston. Bertie and Grouse only added time penalties to their dressage scores to finish 3rd and 8th respectively. Jim had one unlucky pole in the show jumping but his 29.6 dressage was very pleasing.

Mrs Diana Birch’s A Bit Much (Charlie), Miss Amy Burbage’s The Pilgrims Promise (Treacle) and Mrs Susan Allen’s Taal (Harry) were entered in the Intermediate sections. Charlie finished 5th, just a few seconds over the optimum time, whilst the others had steady cross country rounds and will head to Cholmondeley and Gatcombe next.

Gary (Master Crisp) was Angus’ only ride in the Novice, but jumped a lovely educational clear and added only time penalties to his dressage. 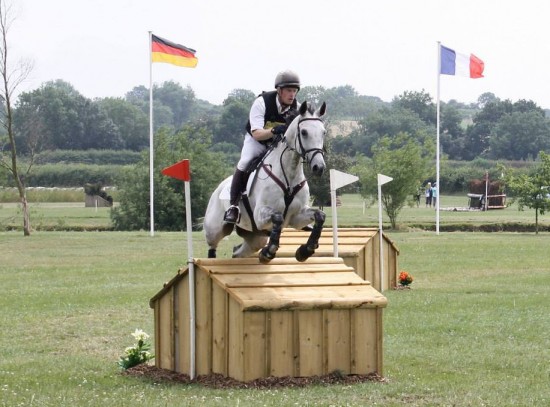 Hilary Manners shadowed Angus and his team at Poplar Park earlier this season. We were thrilled with the article about multiple rides at one day events published this week. The full article is in the gallery. 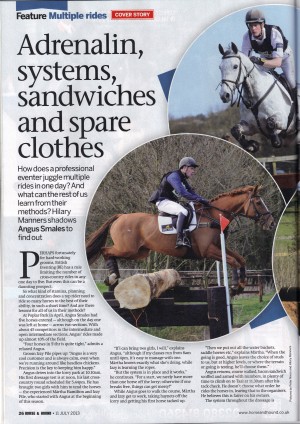 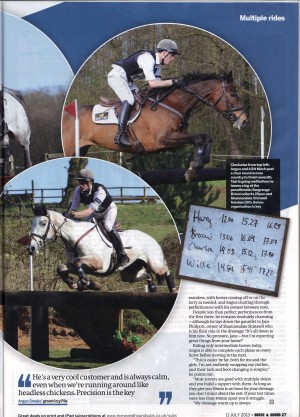 Angus was pleased to leave Buckminster with three out of four double clears across the Novice sections (only Credo rolled an unlucky couple of poles in the show jumping).

This was an exciting event for us as we took my fathers’ Cornsay Grouse (Grouse) and Mrs Tina Sharp’s Ballyvooney (Bertie) along for their first outings of the season. Grouse, Bertie and Shannondale Shinawil (Wils) were all entered in the Open Intermediate. All three jumped superbly across country; Angus is looking forward to the rest of the season with them.

A Bit Much (Charlie) and The Pilgrims Promise (Treacle) jumped lovely double clears in the Intermediate. Angus took Treacle steadily across country and finished in 16th place, whilst Charlie finished in the ribbons (5th) with only 4.4 time penalties to add to his 24.6 dressage.

We entered Lismakeera Sambuca and Diamond Vechta in the BE100 at Milton Keynes. These proved educational and both horses jumped super double clears to finish 2nd and 17th respecitvely.

Angus took six horses to Catton and left without any cross country jumping penalties. All of the horses also posted sub 35.0 dressage tests too which was pleasing. Our best placing came from Lismakeera Sambuca who finished 2nd in a BE100 section. 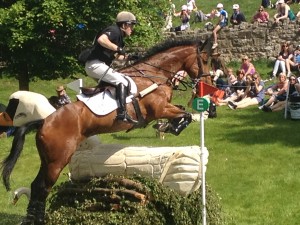 DHI Loner (Jim) was entered in the CIC3* at Bramham. Ian Stark’s cross country courses are always exciting to ride and this track was no exception!

Ian and Heidi Woodheads’ Jim produced a competitive dressage test (48.8) leaving us lying 13th after this phase. Four faults in the show jumping followed by a fantastic but steady clear across country (seen here at the Bond Dickinson water) meant that Angus finished the weekend in 19th place.

Houghton Hall is such a superb setting for an International event and we always enjoy competing there.

Taal unfortuantely had to be withdrawn but we set off on Wednesday with Mrs Jane Phillpott’s Shannondale Shinawil (Wils) onboard to contest the CCI2*.

A very competitive dressage score of 47.5 and a clear across country with only 0.4 time penalties to add left Angus and Wils in 5th position going in to the final phase. An unlucky pole in the show jumping meant that we finished in 9th position which is a fantastic result for this combinations first International event together!

Huge thanks must go to the team at Musketeer Event Management for organising such a fun event for yet another year. 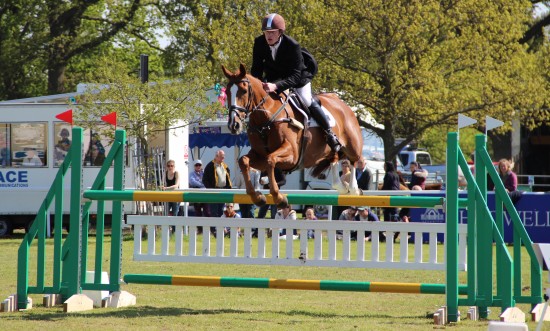 We were excited to take seven horses to Rockingham, a local new venue for Brigstock Horse Trials.

Credo produced a winning dressage score (23.5) in the BE100 on Friday. Master Crisp (Gary) followed a pleasing test (33.0) with a double clear to finish 8th in the Novice.

Angus had three horses entered in the Intermediate sections and two in the Open Intermediate, the most successful of which was MJI Mount Echo who finished 2nd on his dressage score. A Bit Much and Bargrange Brioni also had super clears across country.

Taal and Shannondale Shinawil head to the CCI2* at Houghton next so only completed the dressage and show jumping phases.

DHI Loner (Jim) produced a very competitive dressage test in one of the Advanced sections at Chatsworth this weekend, lying 3rd after this phase. Jim finished 15th after a couple of unlucky rails in the show jumping and a cross country clear.

Angus had three double clears out of four rides at Aston which was a very pleasing result!

Bargrange Brioni (Bri) and Shannondale Shinawil (Wils) were in the Open Intermediate. Wils finished 5th on a dressage score of 33.2 and Bri finished 15th, again on her dressage score.

We also had Mrs Susan Allen’s Taal in the Intermediate. His dressage score of 35.0 earnt him 7th place.

Angus had Diana Birch’s A Bit Much (Charlie) and Helen Jarman’s MJI Mount Echo (Todd) entered for the Novice Regional Final. We were thrilled that both horses produced super double clears to finish on their dressage scores. Charlie finished in 3rd place and Todd in 12th.

Shannondale Shinawil (Open Intermediate – 24.9) and A Bit Much (Intermediate – 35.9) both produced lovely dressage tests, and then had steady runs across country finishing 10th and 7th respectively. 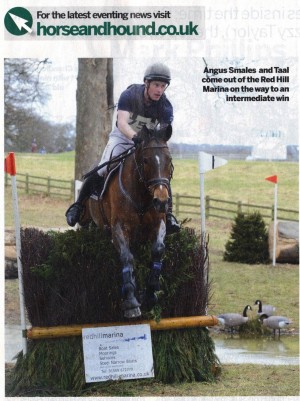 It was good to have some of the horses out competing in the sunshine at Belton and the weekend was topped by an Intermediate win from Taal and a subesquent appearance in Horse and Hound!

Angus gave his other horses steady and educational rides across country, so all will have come away having learnt a lot.

Angus had seven horses to compete over two days at Burnham Market in Norfolk. They all did pleasing dressage tests but Angus took most of them slowly cross country as it was only their first or second run of the season.

New ride, Shannondale Shinawil (Wils) owned by Mrs Jane Phillpott, turned Friday into a very good day with a win in the Open Novice section. Wils will head to the Open Intermediate at Belton next.

To remove this widget, simply go to the Widgets page in your WordPress admin and add a widget into this sidebar.